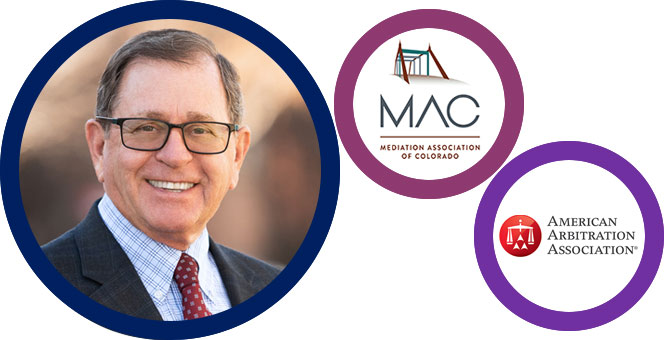 Judge Edward Moss (retired) was a litigator for 24 years followed by 16 years as a Colorado District Court Judge. His practice is limited to mediation, arbitration, and private judging (pursuant to Colorado Revised Statute §13-3-111). Before going into private practice, he was a United States Supreme Court judicial intern and a law clerk to Judge Sherman Finesilver at the U.S. District Court in Denver.

Judge Moss is on the panel of the American Arbitration Association and a member of the Colorado Bar Association business and family law sections. He is a long-time member of the CBA Ethics Committee (Chair, 2016-2017). Judge Moss is a frequent lecturer on trial court practice and legal and judicial ethics and has received several awards including volunteer lawyer of the year from Metro [Denver] Volunteer Lawyers and CASA Judge of the Year. Before being appointed to the bench, Judge Moss was the Mayor of Westminster, Colorado.